scroll down for info

So you've made it to the point where you'd like to send me a message, hm? Well then. Allow me to introduce myself.

I am Niki, as you've probably gathered by now. It's in the title of the website after all.

For all intents and purposes, I am a gamer first, and anything else second. Except game artist now, because that's what I do more than gaming. Thousands of hours into games big and small, good and bad, starting at the diminituive age of 3, when Command & Conquer was released for Windows 95 and MS-DOS. That game, of all games, started my gaming carreer, for this reason, to this day I have a natural knack for, and a bunch of criticism for all strategy games.

With my undying love for videogames came a hobby, much later at the age of 12, called Warhammer. The miniature wargame, and as you'll later see, this was my only experience with art in my early years.

I didn't do very well in class, and didn't know what I wanted to do. then, back in 2008, I had some challenges in my life, when I was 16, and had to work as a fishmonger for a while. It wasn't bad by any stretch, and gave me the oppertunity to think about what I truly wanted to become. And now I know.

In September 2013 my education as a Game Artist started. And I blasted through it, in three years instead of four. Not only was I a quick learner, I was like a sponge attached to a vacuum, I drew all knowledge, all information that I could digest to me until my search went beyond the confines of what the school could offer me. It gave me a skewed view of what I needed and what I wanted. Only during my time at Triumph Studios as a Character Artist were those issues of Design Ironed out.

Now, I pride myself not on my skill, not my final products, not my variety of disciplines, but my ability to learn what I touch at a blazing pace and make it my own, only made faster if it is given firsthand, instead of secondhand.

With that said, I'm my own worst critic, and if something isn't of the quality that I want to present it, it's not going up.

And with that all said, still want to contact me, to enjoy a cordial conversation? Then please, do not hesitate. 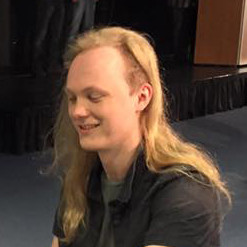